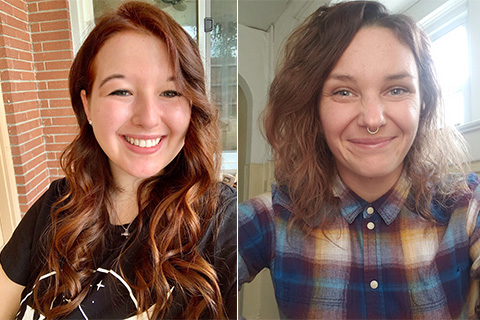 Playing outside and planting flowers in her grandmother’s garden is the subject of Taylor Hart’s poem, which recently took first place in a statewide competition.

Multiple Delta College students, including Hart, placed among the top three in a creative writing and film contest hosted by the Liberal Arts Network for Development (LAND) for Michigan Community Colleges. The winners will be recognized at the LAND annual conference in February.

Hart wrote the poem, “Grandma’s Garden,” for an assignment in a creative writing class last semester. Students were asked to write about a childhood memory.

“I spent a lot of time at my grandmother’s house when my sister and I were little, so this poem really came from the heart,” said Hart, from Essexville. “I worked on this one the hardest, so to see it go so far is crazy.”

Through this experience, Hart said she discovered her passion for writing. She plans to transfer to Saginaw Valley State University for professional writing.

Aryn Blanzy, a first-year student at Delta, took second place in the fiction category of the writing contest. Her story, “The Choice,” focuses on a woman who is struggling with substance abuse. Blanzy, from Tennessee, said the piece is semi-autobiographical.

“The assignment was to take a moment in our lives and alter it a bit,” said Blanzy. “I moved to Michigan to get a fresh start. I have a history of substance abuse and have been through treatment, but this piece is about what would happen if I didn’t leave.”

Blanzy, mom of two boys who also works as a tutor for the WRIT Center, is majoring in English and plans to transfer to U-M Flint to earn a bachelor’s degree. She wants to specialize in linguistics.