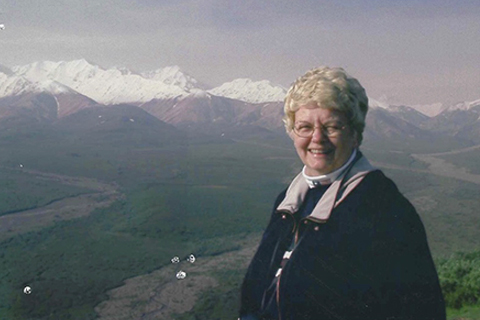 Montesi with Don and Betty Carlyon at the Delta College Planetarium ribbon-cutting ceremony, 1997.

One of Delta College’s longest serving employees who helped lead the college through remarkable growth is retiring after 50 years of service and leadership.

Dean Emeritus Susan Montesi will officially retire in June. She previously retired in 2011, but returned after a short time to serve in several capacities.

In 1970, when the college was 9 years old, Montesi joined the counseling office as an intern and soon became a full-time employee. She was an early fan of the community college model – a relatively new concept in the early 1970s.

“I was fascinated with the concept because I felt strongly that community colleges should serve the entire community, not only recent high school graduates,” Montesi said. “With technology in its infancy and area businesses really growing, I thought the world of work was going to change and adults would need significant education.”

Montesi led the counseling office from 1974-1987 and steadily rose through the ranks to hold several leadership positions, including dean of Enrollment, dean of Student and Educational Services, and dean of Learning Centers and Innovative Programs.

President Emeritus Donald J. Carlyon, who served as president of Delta from 1967-1992, said Montesi was a key leader in the development of many initiatives and projects, including the Planetarium.

“Sue is a leader and is successful in everything she does,” Carlyon said. “When she took on a new responsibility, she would delve into it deeply and immediately. Within a very short period of time, she would be an expert on that particular subject.”

During her time at Delta, Montesi was also instrumental in the creation of new programs, including Possible Dream and “50+…Just Like Gold," among others. She was a leader in student services and shared her love of travel by serving as a Delta guide for many trips.

One of Montesi’s fondest memories is airing the very first show at the Planetarium for a third-grade class, an experience that brought tears to her eyes.

“When the screen turned on and the night sky was surrounding them, they all started clapping. It was one of those educational moments when you know students are understanding something different, and that’s what it’s all about,” she said.

Dr. Jean Goodnow, president of Delta, said Montesi’s passion for students and their development showed in her work every day.

“Sue’s impact on Delta is immense,” said Goodnow. “She has given her heart and soul to our students and our community. From developing new programs to overseeing organizational changes, it’s all been in the name of our students and their success. She was extremely supportive and encouraging to me in my role as president when I joined Delta in 2005 and I am incredibly grateful to have been able to work with her.”

Montesi is a big supporter of lifelong learning and practices it herself by staying involved in community organizations and learning new things. She is currently studying the aging brain and has hosted several workshops about the importance of brain health. After retiring, she plans to continue to travel, learn and spend time with her two children and eight grandchildren.

Montesi said the foundation of Delta – its core – has remained the same through the years.

“We’ve maintained that we are a community college,” she said. “We listen to and serve the needs of our community, and that is the heart of Delta. That is our essence.”