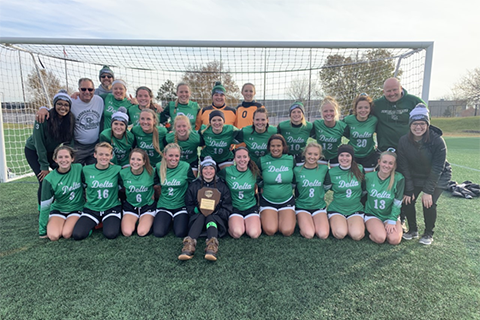 “The girls played amazing. They kept the ball on the ground, played a fast-paced game and played together,” Coach Damon Amey said, when asked about the weekend’s play.

Team comes out on top in quarterfinals

Pioneers move on to championship game

The Lady Pioneers pulled off a nail biting semifinal game defeating Nassau Community College in penalty kicks. Rachel Hahn scored the only goal in the first half. Molly Mantei dominated the goal in penalty kicks forcing two stops. The team stepped up to plate converting penalty kicks by Ana Irish, Lexi Blanchard and Hunter Kukla, ending in a tie 1–1 at the end of regulation and also at the end of the first and second overtime periods. Five players from each team participated in a shootout, ending in the Pioneers winning three goals to one to advance to the championship game. Delta will play at 12pm on Sunday, November 17, 2019 against Brookhaven College of Farmers Branch, Texas.

“I’m super excited to go back to the tournament for the third year in a row,” Coach Amey explained. “This is the moment we have prepared ourselves for all season.”

“These teams are going to be better than most teams in the country and we are going to have to fight that much harder. It doesn’t matter if you’re tired or hurt, you have to put everything on the line or you lose the chance of a lifetime.” Emington said. “We are not going to get second place, this year we are going to bring home a championship!”

All games are available to watch online through NJCAA TV. Keep up to date on tournament news and photos on the NJCAA Division III Women's Soccer Championship page on Facebook and on Twitter at NJCAA Soccer and TCPanthers.

local coverage of the team