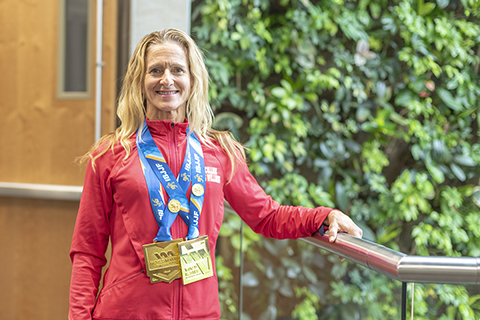 Peggy Barber, a Delta College Health and Wellness professor, fulfilled a promise she made to herself a couple years ago by winning the World Master International Brazilian Jiu-Jitsu Federation (IBJJF) Championship in Las Vegas last month.

It was a particularly sweet victory for Barber, who won the 2017 championship in her division as well, but then was sidelined while taking on a bigger fight against breast cancer.

"In May of 2018 I wrote '2019 World Champion' on my board, and I've had to look at it for a year and a half," said Barber, now cancer-free. "When I won two years ago, it was a big moment, but this one was a different feeling of elation. It's something I will never forget."

Barber has taught a variety of fitness classes at Delta in her 27 years as an instructor, including nutrition, health fitness management, CPR-HCP, Pilates, strength and conditioning, step aerobics and kick boxing. She strives to instill the same goal-oriented ethic in her students that she follows herself.

What Barber couldn't have anticipated when she set the goal was that her 2019 championship would come wearing a purple belt. Her coach, Carl Rabideau at Palms Brazilian Jiu-Jitsu in Saginaw, promoted Barber and her husband, Joe, to purple belt two days before she had surgery in Ann Arbor. Her son, Vince, also competes.

This wasn't the first time Barber had to stage a comeback. Her 2017 championship came after reconstructive knee surgery due to a torn anterior cruciate ligament that kept her off the mat for a year.

This year's event belonged to Barber, though. After a 19-0 win propelled her into the final, Barber forced her opponent to tap out in 1:30, giving her the gold medal. The Masters Championship draws competitors age 30 and over from all over the world and is held in conjunction with the World IBJJF Championship.

The combination of the thrill of winning championships and the sheer joy for the sport keep Barber motivated as she sets new goals for herself.

"Long term, I would love to earn my brown belt and the ultimate goal is the black belt," she said. "I've come this far, It will take about a year or year and a half on each, but I would love to get back to worlds and compete at those levels."