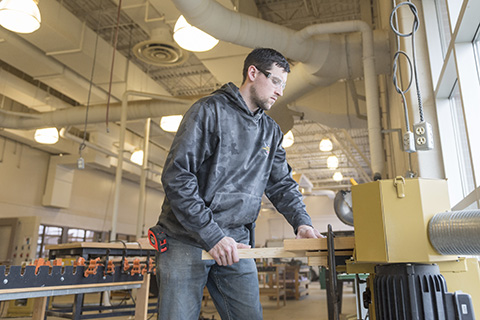 "If I had to describe Delta in one word I’d describe it as 'successful'. Because when you get done here at Delta, that’s exactly what you are going to be, successful."

Adam started college right after high school but learned it "definitely wasn’t the right time" for him. He joined the Army and after a couple of tours, he made a plan for what he wanted to do. "And part of that plan was having my own business," he explained.

Adam plans to start a construction business. He has been interested ever since he was a little kid watching his dad pour concrete. He laughs, "Ever since I could walk I was in concrete." Adam didn’t know a lot about the business-side of the trade but just knew that’s what he wanted to do.

He began researching and found Delta’s construction management and residential construction programs which "had business classes and the actual trade section. Not too many colleges around here have that."

"I didn’t know exactly how it was going to work out." Because, as Adam explains, "The whole veteran community is a completely separate environment from the civilian world." However, once he visited the Veteran Services office on campus he felt reassured. "It’s a veteran community environment there and we keep that camaraderie." They help make sure his classes are approved and that he receives funding through his GI Bill.

Adam also chose Delta because it’s close to home, he can work while going to school and because of its "smaller classes, you have more one on one time with teachers and connections to resources," Adam says.

"We have actual conversations with the biggest builders around. We have people that want to mentor us and people that want to hire us." Adam knows that when he leaves Delta, he will have hands-on experience to list on his resume, "not just the knowledge."

"I started researching what to do to make my vision come true and I found Delta."

Adam appreciates that "When you talk to teachers here, you’re not just another student." When he contacted one of his instructors after hours, Adam said "not only did he answer my question, he made sure I had the resources. And that was the coolest thing ever."

"If I had to describe Delta in one word I’d describe it as 'successful'. Because when you get done here, that’s exactly what you are going to be. Successful."

Are you interested in starting a career in construction management or residential construction? Delta College is the perfect place to start. Apply now.