After working in banking for several years, a conversation with his sister spurred David Ross to consider a career change. 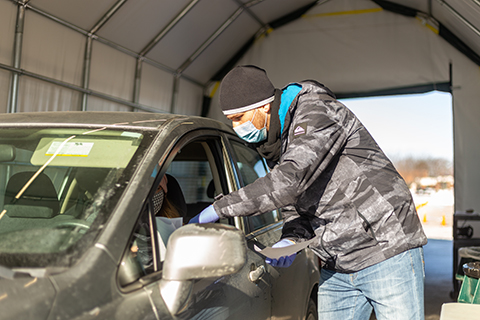 David returned to campus this winter to volunteer at a Covid-19 vaccination clinic.

“I felt unhappy with my job, so my sister asked me, ‘What do you want in a career?’ I realized I want to be on my feet helping people and making a difference,” said David, from Bay City.

David’s sister, who is also a Delta nursing graduate, suggested he look into the profession.

“That’s when the light bulb went off,” he said.

David left his job, took a part-time position as a transporter at a local hospital and enrolled at Delta. He graduated in 2019 and is currently working as a registered nurse in the cardiovascular intensive care unit for Covenant HealthCare.

David attended Delta after graduating from high school in 2007, so returning to campus was easy because he knew his way around.

“Whether you’re a student or stranger, you feel like you know Delta and the people who walk the halls,” he said. “It’s a comforting feeling to know that you’re seen, heard and supported. My classmates became like my second family.”

The best part, David said, is the instruction. His professors, like nursing professor Daisy McQuiston, made the learning experience special.

“She was so engaged with the class material and the students that you didn’t want to miss class,” he said. “You can tell the professors are excited about teaching, which in turn made me excited to be there.”

As David moved through the nursing program, he recalls being intimated to perform all the ‘firsts.’

“Whether you’re a student or stranger, you feel like you know Delta and the people who walk the halls. It’s a comforting feeling to know that you’re seen, heard and supported.”

“I was afraid to give my first shot, to start my first IV, and just being at the bedside for the first time with patients, but as I progressed through the program under guidance from instructors, they really instilled confidence in me. By the end of the program, I felt great and incredibly proud.

“I knew that I was set up for success and was given an excellent foundation to begin my career,” he said.

Are you interested in starting a career in nursing? Learn more at delta.edu/nursing.